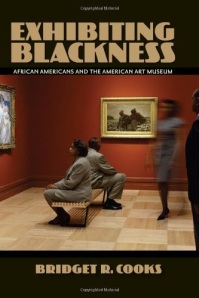 Cooks highlights influential markers that have impacted African American artists and how their work is displayed, paying close attention to early exhibitions such as the Harmon Foundation’s An Exhibition of Paintings and Sculpture in 1929, the Metropolitan Museum of Art’s Harlem on My Mind in 1969, and the Los Angeles County Museum of Art’s Two Centuries of Black American Art in 1976, to name a few. Each of these exhibitions, among others, was problematic for various reasons, one of which was the lack of self-representation by African American artists themselves. Cooks contends that a majority of the problem stems from the interpretive framing of Black people as inferior which by extension includes Black art. She also states that art exhibitions in mainstream museums, to this day, continue to perpetuate a racial hierarchy of difference and employ racial exclusion.

The book concludes with the hope that frequent inclusion of African American art and artists within mainstream art museums and exhibitions is what will rewrite the current racial paradigm that sets African Americans apart as unequal. This left me with the realization that emerging museum professionals have a great responsibility to shoulder which extends beyond merely implementing inclusive measures within museums, but also encompasses changing long-standing perceptions and historical perspectives. As an African American woman, I move forward within this museum studies program, and ultimately the museum profession, recognizing that this is a responsibility I have already accepted, simply because racial hierarchies and racial exclusion are societal issues I resist on a regular basis. As a result, it is my goal to become an integral part of and help facilitate a change in art museums, the museum field, and society as a whole that will ultimately include all people and acknowledge us all as equal.